7:15 am – Move the grading operation back to school

12:30 pm – Someone must be praying for me, because I got more graded today than I thought was humanly possible after the late night!

5:37 pm – I arrive at home with a Macy’s gift bag. Are there presents inside? No, only more papers and projects to grade! (Some of these, though, are really cool poetry projects that are fun to look at and are easy to grade.)

8:43 pm – My friend Jo arrives to keep me company as we grade. I make popcorn while she reads a delightful story written by one of my students. 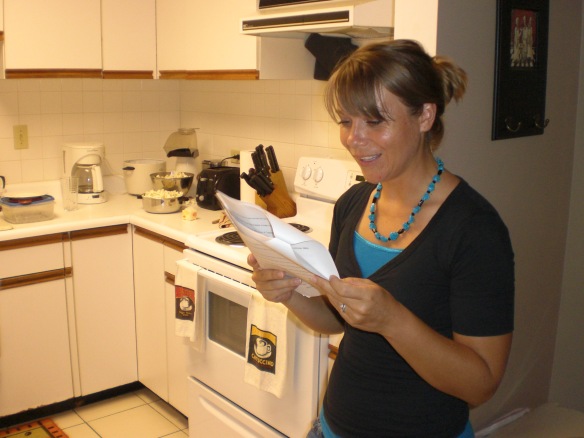 9:30 pm – We watch some of West Side Story and periodically stop to chat 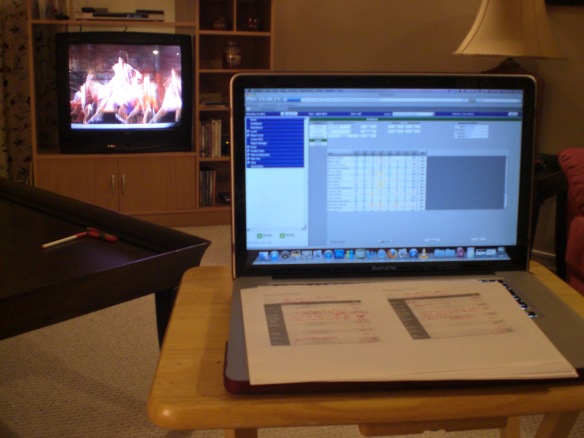 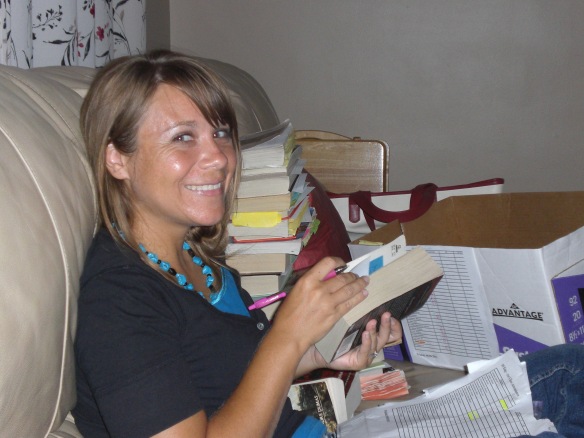 I’ve been reading the seniors’ final journal entries and grading late work. The end is in sight! On Monday and Tuesday I’ll give scantron exams, so those will be easy to grade and enter. I should be done grading by next Tuesday afternoon.

8:00 pm – Get home from school with a huge stack of papers to grade and temporarily panic and dread the impending lack of sleep

8:30 pm – Avoid becoming a sniveling mess by listening to a message about contentment (\”Contentious or Content\” – Carolyn McCulley at the Grace and Truth Conference), by sorting out the mess, and by writing in my “Thankfulness Journal” about how thankful I am for my students who are represented by the stacks of papers

9:30 pm – Finish the first stack of test while listening to the song “You Never Change.” This verse ministers to me:

Help of the Weak

Though mountains fall into the sea

Though tempests may rage

The sun hide its face

Your favor will rest upon me”

And from the refrain:

“I will trust in You

For I know You never change”

1:30 am – Decide to go to bed, even though I have not finished the third set of tests

I have been incredibly busy and have neglected this blog terribly. I have started several posts, and have especially worked on my current series, but I have not been able to finish them yet. I’m going to spend the next 30 minutes or so trying to update these posts, but then I probably won’t be able to write again for several more days.

These last few weeks have been busy with yearbook meetings, faculty recital, half-marathon training, and school work. I thought I wasn’t going to make it through this week, but the Lord was gracious and kept supplying His strength in my weakness. Again, this weekend is full (with the half-marathon and then a yearbook work meeting tomorrow, church on Sunday, and the yearbook deadline on Monday), and then I’ll have a ton of grading to do before the quarter ends on Friday.

I’ve been overwhelmed at many times, but I’ve also been clinging to God’s Word and trusting in Christ to deliver me and in the Holy Spirit to give wisdom and direction about daily activities.

2 “Behold, God is my salvation;

I will trust, and will not be afraid;

for the LORD GOD is my strength and my song,

and he has become my salvation. ”

3 With joy you will draw water from the wells of salvation.

4 And you will say in that day:

“Give thanks to the LORD,

call upon his name,

make known his deeds among the peoples,

proclaim that his name is exalted.

5 “Sing praises to the LORD, for he has done gloriously;

let this be made known in all the earth.

6 Shout, and sing for joy, O inhabitant of Zion,

for great in your midst is the Holy One of Israel. “

1. Sometimes I wonder if I like a cover of a song better than the original because I heard the cover first or because it really is better than the first one. It’s kind of hard to objectively judge that.

2. Students overuse and incorrectly use the “not only . . . but also” sentence construction.

3. I like Josh Groban’s new cd, Illuminations,  better than I thought I would, given some of the negative and conflicting reviews of it. But I like an eclectic assortment of music, including classical music and modern music, so I appreciated the artsy-ness of the cd. If you want run-of-the-mill pop music, don’t buy this cd. That sounded condescending, but many of the songs remind me of art songs, which are highly descriptive but don’t have easily sing-able melodies. Josh’s songs are a little more repetitive than some art songs (not in a bad way, but in the sense that they have a refrain).

4. A lot of preachers and musicians speak of “brokenness,” and while I can see the general principle in Scripture, I wonder if this topic is directly expressed in Scripture. Brokenness is also defined in a different way by each person who preaches or sings about it, so this complicates matters. I’d like to study this word/concept and maybe write about it later.

5. Michael Phelps’s Olympic races were amazing. (I just finished reading a paper comparing Mark Spitz and Michael Phelps.) If I had time, I’d look them up on YouTube, but I want to go to bed before midnight.

6. The music video for Josh Groban’s “Hidden Away” is pretty good.

7. 11:47 pm–I’m to the point that I should just go to bed, because I can’t focus on these papers any more, but I’m afraid I won’t wake up in time to finish in the morning. The recurring grading dilemma . . .

9. 12:17–Well, I have two papers to finish, but my brain is fried, so I’m going to bed. Hopefully I’ll be able to get up to grade them in the morning.

10. Staying up late to grade papers when I have a cold and no voice probably isn’t a good idea, but at least tomorrow is the last day of teaching I have this week.

Even though rainy season can be depressing because it’s usually cloudy and rainy, we get some of the best sunsets during these few months (when the sun is actually visible through the clouds!) 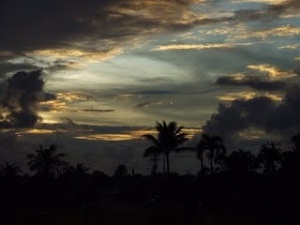 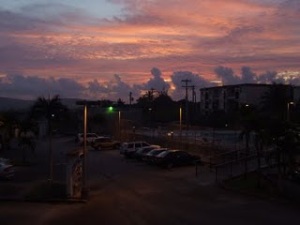 I’m no poet, but someday, I’d like to write about the beautiful morning I spent at the beach. A couple of friends and I ran for a while and then found a favorite spot on the beach to read our Bibles and spend time with the Lord. What a refreshing way to spend the morning! When I came home, my soul was still and I didn’t want that special time with God to stop, so I read my Bible for another hour. The papers could wait!

Leaning against a smooth, hard palm tree in the shade of another
Constantly adjusting my position for the coral rocks and ants
Bothersome flies
Palm trees as far as the eye can see on either side of me
The sun filtering through the brittle brown leaves and the wind rippling through the husky, stiff fronds
Dry wind whips sand into my eyes
Patches of rocks and rough sand
Wild, green growth forging its way to the sea
Aqua-green splashes on the shore
Rust-brown coral barrier
Peaceful lagoon
Waves crashing on the reef
Deep blue stretching out to the horizon, where it meets the pale blue sky with pinky-purple tones
Purple-grey clouds etched with dark blue-grey
Wispy white clouds casting faint shadows on the sea
Distant land in dusky grey hidden by splashes of salt sea mist
Far off city feels like another world
High-rise hotels and gourmet restaurants don’t belong here
Just me, my God, a Bible and pen, and a tree to lean on
All is peace and rest, quiet in my soul
The gentle lulling roar of the ocean, the soft breeze, filtered sunlight, and lazy clouds–all remind me God loves me.
He is here. 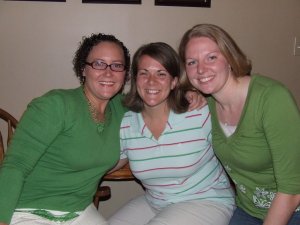 The Filipiaks invited me over to their house on New Year’s Eve to enjoy their end-of-the-year celebration. The Baldwins, Babins, and several singles were there and we ate delicious fiesta food, played games, and prayed in the New Year. For more pictures, click here. 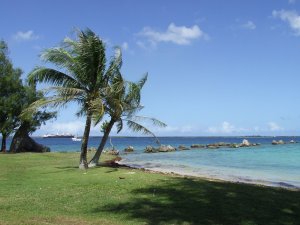 On December 29, 2007 the Singles class went to Gab Gab for a fabulous afternoon of snorkeling, picnicking, jet skiiing, and fellowshipping. Gab Gab is a beautiful beach on the main Navy base, “Big Navy.” We had to sign up a month in advance and show ID to get on. I’m glad we have several members with base access, so it was possible for us to get on and enjoy a relaxing afternoon. I’ve been on Guam for 2 1/2 years now, and until this week, I had never been on a military base. However, during the last two weeks of December, I went on base 6 times! For more pictures, click here.

Tonight my campus daughters (Youlean and Selwe) and a couple of their friends came over to celebrate Youlean’s birthday, which is tomorrow. We swam in the pool, ate cake and ice cream, and watched a couple of movies (Nanny McPhee and Charlie and the Chocolate Factory.) Despite the sugar high from the cake, ice cream, Pepsi, and fire Cheetoes, they’re passed out on the couch . . . or on their way to being asleep soon. For more pictures, click here. 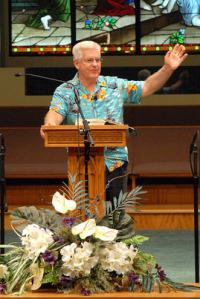 Dr. Ollila preached for the revival meetings that were held at Harvest the week of Sunday, October 14, 2007. He opened the first service with this challenge: “I will be honest about my condition and obedient when God speaks.”

Monday p.m.: “Laboring to be Accepted”

The Books of History

Chronicles of Natalie
Create a free website or blog at WordPress.com.